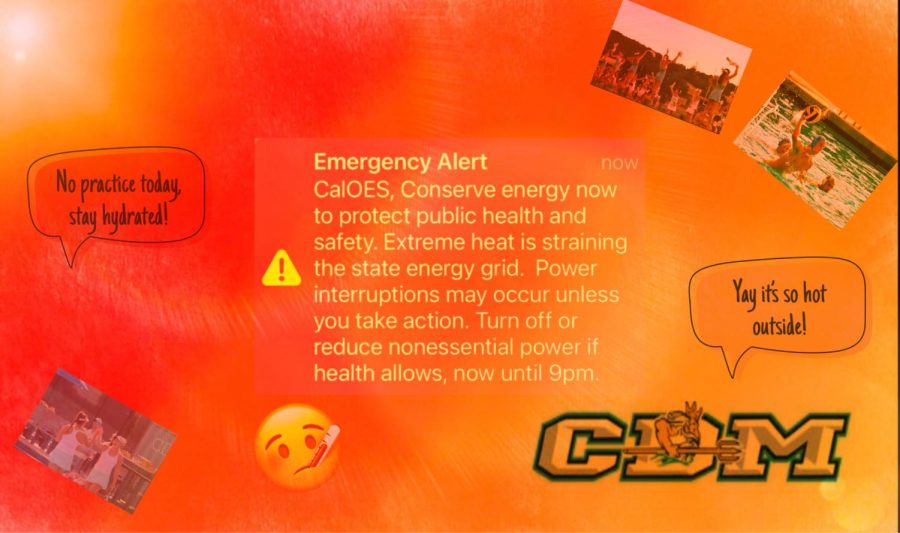 Albert Hammond’s song “it never rains in southern California” proves to be an extremely accurate representation of Southern California’s recent forecast. The California heat wave brought on some outrageous temperatures this past week. Some days Newport Beach reached 97 degrees around noon while other inland areas like Santa Ana recorded temperatures as high as 108.

Many CdM sports that are currently in season have endured the heat to continue practicing and competing these past three weeks. Due to the increasing heat and humidity the Newport-Mesa District has provided athletic directors with a 4-tier Hot Weather Guideline. As of last week, Newport has fluctuated between the first and second tier. The second suggests 96-99 degree weather with a humidity of below 40%. According to these guidelines, any region exceeding 104 degrees is not permitted to host outdoor sporting events. CdM’s new athletic director Brian Walsh sends “out daily reminders to make sure that coaches are aware that [Newport-Mesa is] still at an elevated heat index” and the implications of the district weather protocol.

According to Walsh over the past ten years, the district has ensured coaches become more aware of these protocols and “educating our coaches”. Walsh added that “all [CdM] coaches are certified through CIF” and “ take a heat illness awareness course.”

Walsh said his priority and the priority of the coaches is to work on “modifying things depending on where we are in that heat index category.” Walsh made it clear that CdM “coaches generally care about the health and safety of [the] students and athletes” and said that “they more than anybody want to make sure [students] are safe”. As for modifying recent games, Walsh said they set “canopies on both sides of the field for both [football] teams” and said “there [was] going to be intermittent water breaks more than normal.”

Speaking of modifying practices, Katherine Popper, a Junior at CdM and a member of the cheer team explains that “instead of finishing practice at 4pm…[her coach is] going to try to finish by 3:15pm because of the heat.” As far as tennis goes Emilie Lew, a Freshman on the girls tennis team reports that coach Jamie “cuts practice off 15 minutes before [they] usually end because everyone’s really tired and just can’t play anymore.” Polina Briggs another Freshman on the girls tennis team gives insight into how it is to play matches back to back by saying that the players “only get two minute rests in between so…[they] don’t really want to play another match after that.” Lew followed Briggs by saying that “…[they should] have at least a ten minute break between matches to recover from all the running that [they] do in the heat.”

Although the heat may be dying down, students and athletes are still encouraged to hydrate, rest, and to not exert themselves when practices are in the heat or sun for a long period of time!