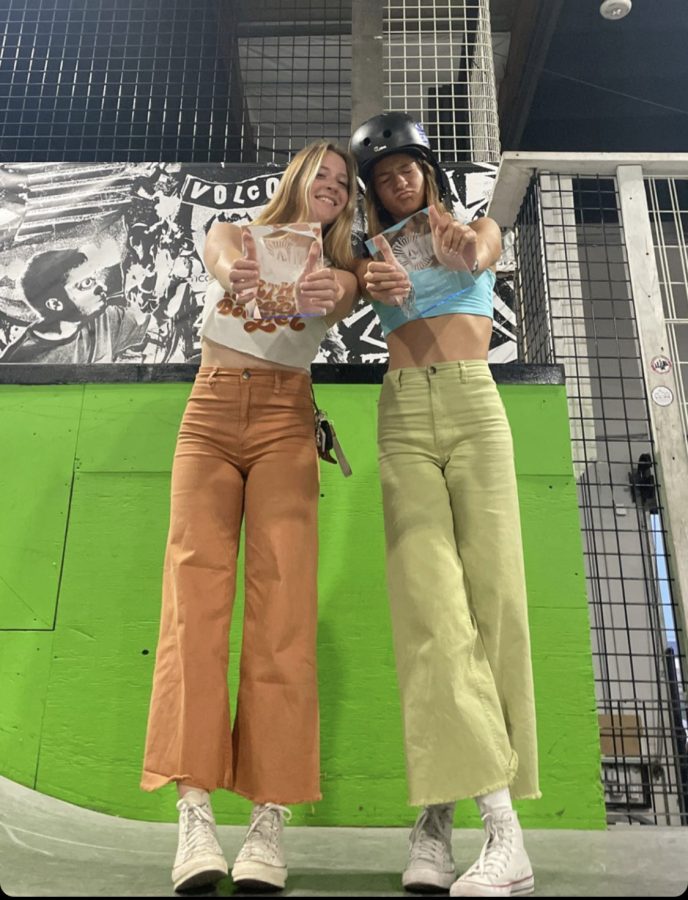 Junior Ryleigh Snow and Sophomore Tara Ordoubadian with their awards.

The Corona del Mar high school surf team held their banquet to commemorate the 2021 season on Monday, May 9th. The team was excited to finally have their banquet after the initial banquet, in January, had to be postponed due to Coronavirus concerns. Every year the banquet is held at Volcom’s private skate park, giving surfers the opportunity to skate the exclusive indoor track by themselves. Members of the 2021-2022 team, surfer’s families, and the coaches were all in attendance.

The night began with street tacos and skating, allowing time for team members and families to bond and giving all the skaters a chance to work on their ollies. Then about an hour, later the group gathered together to remember the season. Awards were given out for best new surfer, best competitors, and a coaches award. Aiden Stein and Tara Ordoubadian won best competitors for their stellar achievements throughout the season as both surfers made it to the league finals and placed. Newcomer Conrad Bancroft won the best new surfer award, as a newbie to the team he went all the way to league finals along with Stein, placing as well.

After awards, a recap video was played that displayed clips of students surfing as well as photos taken during practice or competitions. For junior Matei Yarchiever, this was his favorite part of the night as he, “…got to watch all the other surfers shred.” The night was finished off with cookies and a giveaway. Volcom, very generous, gave the team countless items to raffle off. From hats to backpacks, to wallets, to jackets and shoes. All were up for grabs. Sophomore Tara Ordobaudian is super grateful to,”…have Volcom as a sponsor and such great coaches to give us these opportunities.” Overall the night was a great way for the team to reflect on the year and celebrate all their hard work.