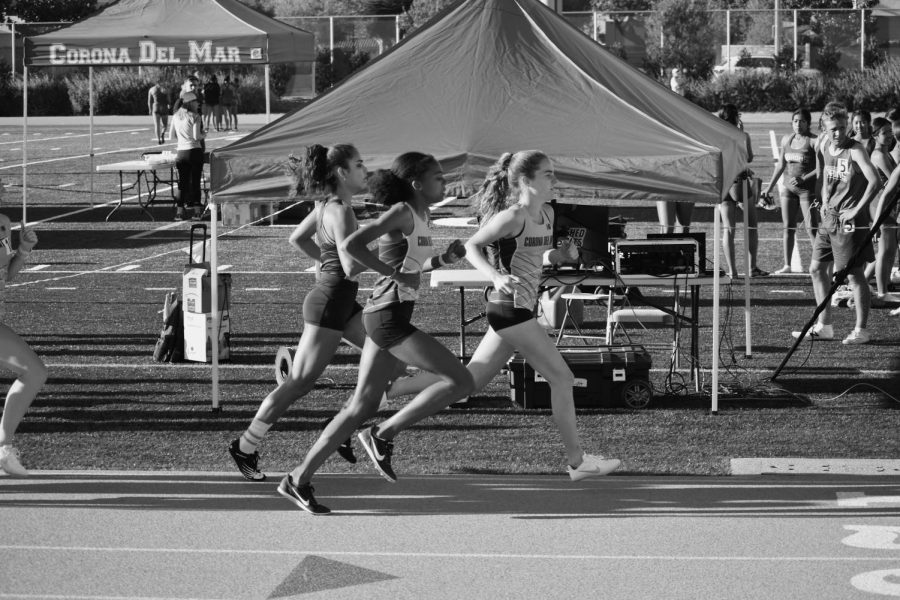 Thursday the 30th held a home track meet for the second week in a row. A wave of magic seemed to occupy itself in the air as several athletes broke their personal records, while the girl’s varsity and boys’ junior varsity took home the highest scoring for their respective categories against Edison. To describe the afternoon as crisp would be an understatement when witnessing kids bundle up in mismatch-y sweatsuits while pacing tensely across the team tent’s crackly placemat. CdM track &field will have one more dual meet against Laguna Beach this upcoming Tuesday before they prepare for an intense round of league preliminaries.

Notable mentions include junior Bea Douglass, whose pre-game pump-up always consists of something along the worrisome lines of “bro! I can’t do this…I think I need to go to the bathroom,” right before she demolishes her opponents by a 75-meter margin, clocking a time of 12:28.45 for the varsity 3200-meter event. In the last 100 meters, Douglass opens up her stride, points her head straight down, and flattens her hands, separating her fingers from one another as she drives her arms to meet the finish line with all that she’s got left after competing in the 1600 meter race earlier in the day.

Per usual, sophomore Ava Simos crushed both the varsity 100-meter event, clocking a 12.61 with a +1.0m/s headwind, as well as a 15.95 in the 110 hurdles. Simos is a new addition to the team, having joined this school year as a native Aussie with lots of spunk and speed. As she emerges from her blocks, her body rises as the starters queue to “set” booms from the mic. With one swift motion, the start gun will rip out the sound of an underwhelming firework. In the same instance, Simos begins to travel up the lane, forming an obvious separation from the field all the way through the finish line.

Dakota Yan played a decisive role in the girl’s frosh-soph division as a dedicated member that will always be there to try any event, and step in for absent people if needed. Today was the freshman’s first varsity 200m dash and 4x100m relay after already having competed in the long jump and triple jump. Yan came running back to the team tent to squeal, “I finally pr-ed in the triple jump! I needed that,” as she squatted on her knees with a wide, freckled smile plastered across her face.

Alas, CdM’s cross country and track & field programs have yet to create a bigger team, with more hopeful chances of beating schools that are not necessarily better, but have larger chances of winning due to their team size. It is encouraged to reach out to the running coaches to consider joining a sport that allows one to gain true meaning behind the words discipline, hard work, and patience.