Dancing With the Teachers 11/10 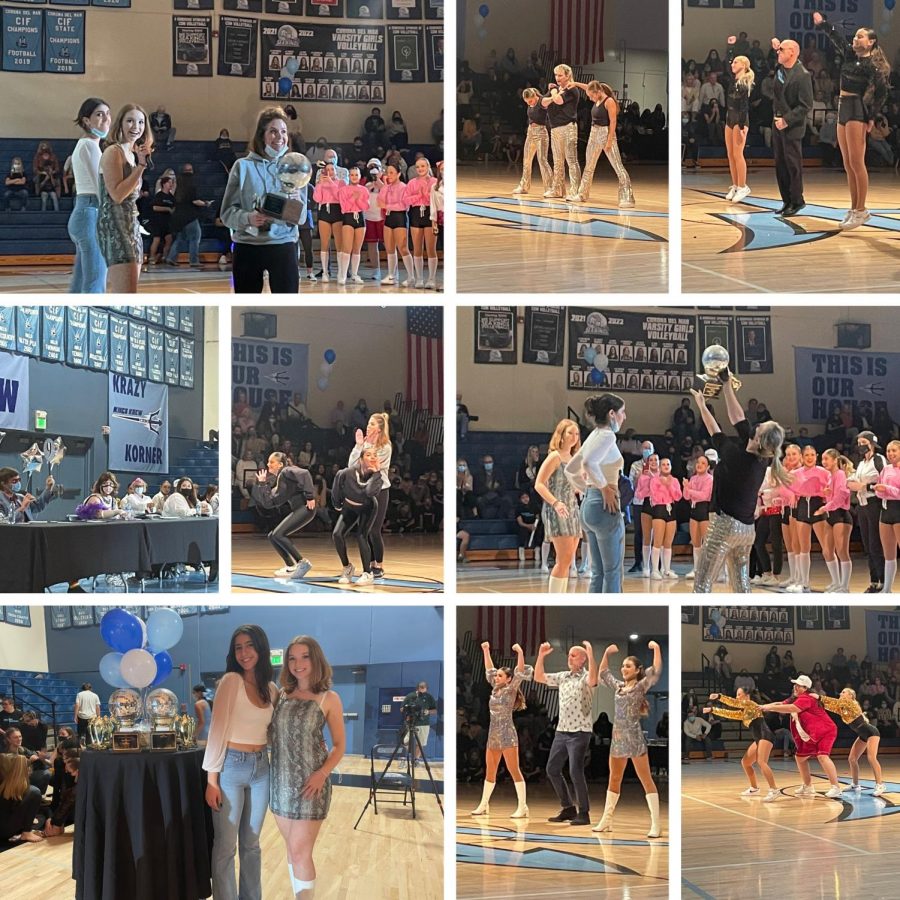 The lights dim, the crowd quiets down, and the gym is filled with the sound of an introductory video. The video is a comedic conversation between hosts, senior Emily Valentine and junior Ella Avital. The video ends and lights emerge revealing the two hosts impeccably dressed. They go on to introduce the judges, teachers Andrew Ball, Kelly Burgess, and Vicki Schwarz, earning applause with each introduction.

The lights dim again and a video bursts to life on the projector, it is an introduction of the first team to compete. After the short video, the gym is filled with the sound of music, the lights kick on, and the dance begins. When the performance is over the judges give their scores. This repeats for all 9 teams.

Each team consisted of Orchesis dancers with their teacher(s).

Mimi Palmer and Kim Rapp were in team number 1. They did a jazz-themed performance to a compilation of “Everybody”, “Step by Step”, “Bye Bye Bye”, “Classic”, and “Kiss You” earning an 8 from all three judges.

Tammy Owney was in team 2, doing 70’s funk to “Somebody to Love” and “Another one bites the Dust” by Queen in honor of Mr. Emme. The spectacular performance earned a 10 from all three judges and Burgess called her the “Queen of [her] heart.”

Vanessa Valdes danced in team 3, doing hip hop to a mix of “Stir Fry” and “MotorSport”, in which she received a 9 from all the judges.

In team 4 Jennifer Walters, doing 80’s jazz to a compilation of “Gonna Make You Sweat”, “I Wanna Dance With Somebody”, and “Le Freak” earned an 8 from Schwarz and Ball and a 9 from Burgess.

Team 5 was Chris Ziebarth and they did jazz-funk to “Pump Up the Jam” and “Groove Is In the Heart” gaining a 10 from Ball and a 9 from Burgess and Schwarz. Burgess later explained it as a, “Mix of my Dad and Napoleon Dynamite.”

The 6th team had Shelly Dante, doing hip hop to “Walk It Talk It” and “Laugh Now Cry Later” earning a 9 from Burgess and 10 from the other judges.

Laura Mayberry was in team 7, performing “jazz-funk along 24k Magic” getting two 10’s and a 9 from Ball.

Last but not least Joshua Hill was in team 9, doing hip hop to “Fireball”, “Hotel Room Service”, and “Don’t Stop the Party.” Receiving a 10 from Burgess, a 9 from Schwarz, and an 8 from Ball who told Hill, “… hips don’t lie but yours did,” then turning to the audience and stating, “It’s good to have tenure,” erupting laughter from the audience.

During a short intermission, students could pay $1 per vote for their favorite teacher.

Following the intermission were performances from Sparkle, Orchettes, Dance 3, and Orchesis.

After those performances, the winners were announced. Ms. Owney won the judge’s vote and said “Fourth year’s the charm” soon following that with, “It’s all about the disco ball.” Ms. Dante won the fan-favorite vote and expressed a thank you to her voters.

In the days before the show, some of the students and staff involved in dancing with the teachers were asked what they were most excited to see. Host Valentine responded, “I personally always love hearing the different mixes.” Her partner host, Avital, stated, “I think Mr. Ziebarth is an awesome teacher.” She later added that she is excited to watch the whole show because  she has “a lot of friends in Dance 3.” Teacher Ms. Valdes said, “ I think it’s really about the community and entertaining the community and also trying to build relationships with the students.” Judge Burgess exclaimed,” I am excited to see all the teachers show up and show us what they got… to see them get the school pumped up and support Orchesis because that’s what this whole thing is about.” Orchesis president and one of the dancers in team 8, Kyla Abdelgawed stated, “…it’s so unexpected, teachers, you don’t think of them as dancers, but some of them got the grooves and you have no idea.”

Over a month’s worth of preparation definitely paid off. The night was loud, fun, and filled with energy. The hosts were comedic and provided great support to even greater performances.