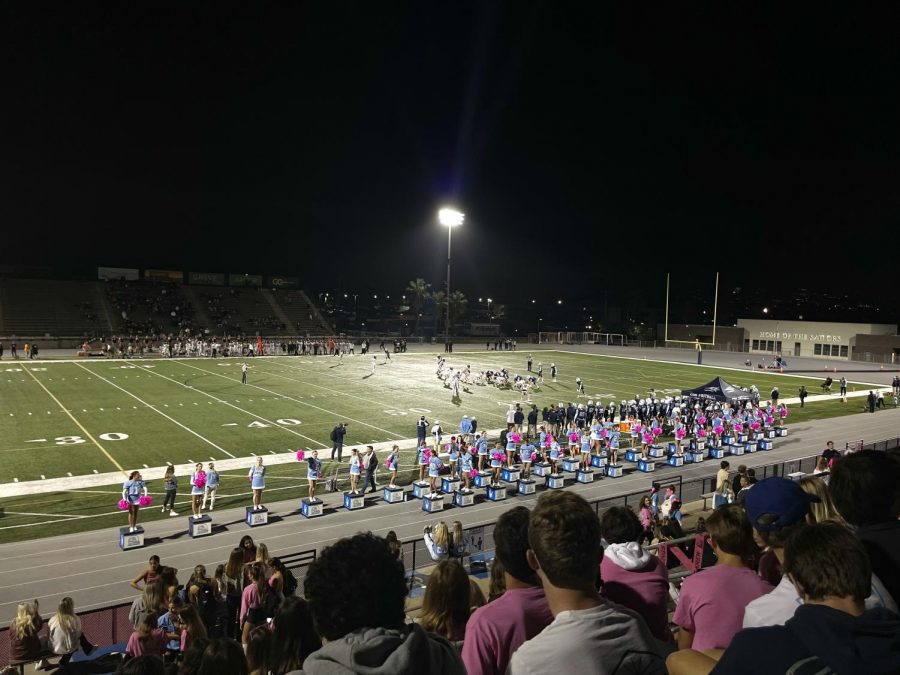 As the weekend has flown by, students can reflect on their time and experiences from the amazing game that took place on the evening of Friday, October 8th. The result of the game was a victorious score of 35-8 which makes the CdM Sea Kings 6-1. To recap, the team has beaten the Downey Vikings 36-20, the Paramount Pirates 56-8, the Palos Verdes Sea Kings 41-7, the San Clemente Tritons 7-3, and the San Juan Hills Stallions 45-7. Unfortunately, last week’s game ended in a loss against the Los Alamitos Griffins 14-42. This ultimately pushed the Corona Del Mar Sea Kings to win their last game before the monumental Battle of The Bay game.

Although the game was incredibly special all by itself, what made it even more successful and impactful was that it was “Pink-Out” Day. The whole month of October presents itself to be Breast Cancer Awareness month in which CdM and the community honor those who have fallen to the disease or loved ones who have. Ella Avital says that “[she doesn’t] think [she’d] know it was breast cancer awareness month hadn’t been for the pink-out game.” Without the “Pink-Out” game Breast Cancer Awareness month would not have the same opportunity it has had, to be shared with the students here at CdM.

Hearing from Collin McKenna, CdM´s very own mascot he expresses that “It was really fun getting everyone all hyped and hearing all of them chant.” To the many that attend the football games seeing Collin McKenna rising to the occasion and boasting with enthusiasm could be labeled as the highlight of the football game experience.

At the end of the day, these football games are very influential to students’ high school experiences as Ella Avital says how “they create a really awesome culture at CdM and also bring us all together for some common thing at the end of the week.”

As the Pink Out game win against the Oilers has been obtained, the CdM Sea Kings now look forward to the game of the year against Newport Harbor’s Sailors!