Fire in the Girls Bathroom on Friday, September 24th, 2021 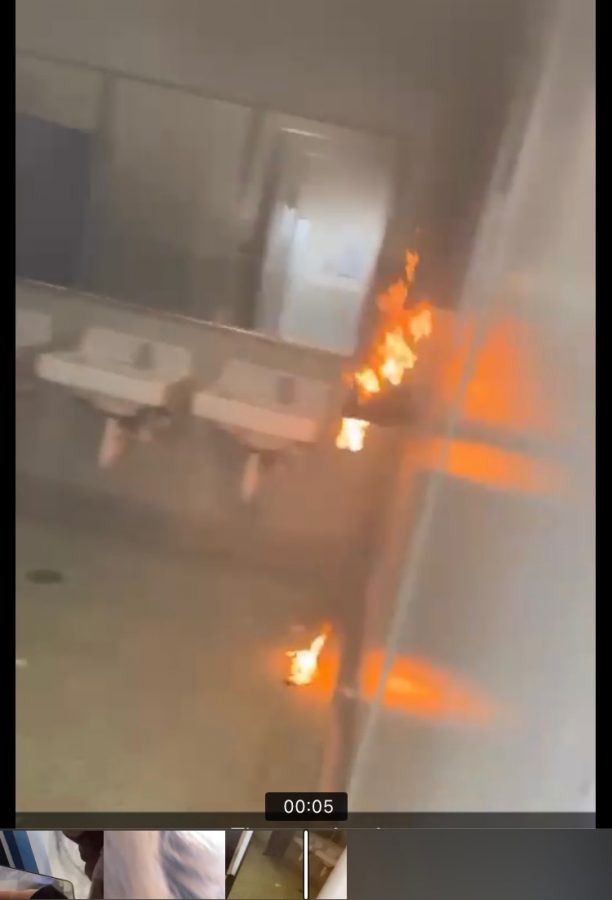 Screenshot of a video taken by a CDM student.

On Friday, September 24th a fire erupted in the girl’s bathroom in the 200 building. All was normal on the average Friday forenoon until the fourth period bell rang and people began getting dismissed from class. Students began getting their lunches or leaving for the weekend. Within a minute of the bell ringing, a noticeable smoke started seeping out of the girl’s bathroom. The smoke caught the attention of hundreds of students, as they started congregating around the door, making a crescent-shaped crowd. Students bobbed in and out of the bathroom, trying to take pictures and videos of the disaster. One student remarked in a snarky tone, making the Trident writer laugh, “the ONE time there is an actual fire, we don’t have an evacuation”. They concluded that statement with a head shake of disapproval.

Teachers and staff members heard the clamor and scented the aromas of the fumes and came outside. Trying to see what was going on, the teachers assessed the situation and attempted to calm the students and get them to disperse. The students, so eager, would not listen. Once more staff came, the students slowly began to leave. The majority of the kids left the scene to go eat lunch, while others lurked in the background.

After about 5 minutes of the staff arriving the Fire Department came and handled the situation. They left about an hour after the fire erupted, leaving their footprints of ash around the bathroom.

Some students vocalized their theories of what happened. One kid said, “one of the girls was probably smoking a joint and was too high to realize what she did”. There was some speculation as to whether students were smoking cigarettes. Someone responded, “that’s so 1980’s. I thought everybody just vaped now.” Someone else shouted, “it was probably a firework”.

A note from a student: “a) If you’re gonna smoke in the bathroom, do us all a favor and clean up properly and b) if you’re in the bathroom filming the fire as it burns maybe you can just put the phone down and get some water or help. Just a thought.”

The CDM administration made a statement and notified the parents and guardians all while this disaster was happening. Luckily, with the help of the local firemen, firewomen, and CDM staff, the fire was put out in a little over an hour.