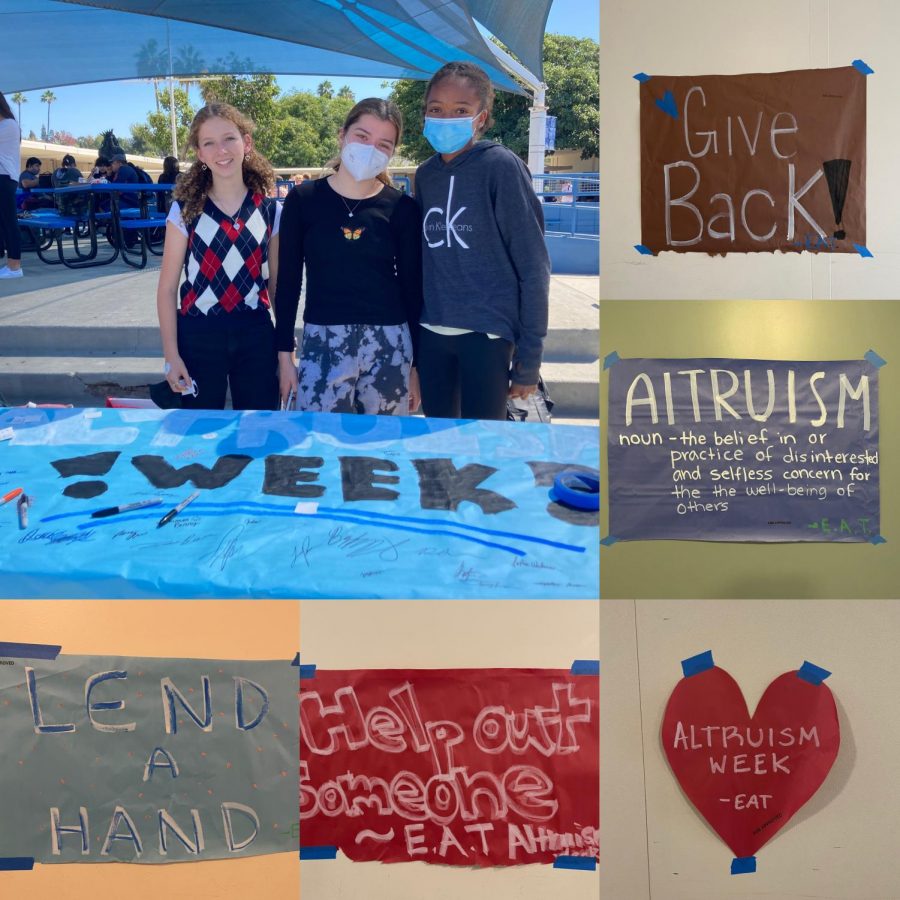 The past week was Altruism week. Altruism, according to Webster’s dictionary, is unselfish regard for or devotion to the welfare of others. Altruism week is put on by the club E.A.T (Encouraging Altruism in Teens) to encourage students on campus to be Altruistic. Senior Veronica Shedd, President of E.A.T. stated, “ The goal of altruism week is to educate students on what altruism is because many students do not know the definition. So E.A.T hopes to teach students that being altruistic is not that difficult, you just have to be selfless and put others first who need the help.”

They put up posters around campus (pictured above) encouraging people to be altruistic and explaining what it means to be altruistic. They also had a video play every day on Trident TV encouraging students. As well as, an event at lunch where they handed out stickers and students signed a poster promising to be altruistic. Junior Alex Venanzi, E.A.T’s social media coordinator stated, “Our goal is to not only inform people of what altruism is, but also help motivate and encourage people to use altruism in their daily lives whether it be volunteering at a  beach clean up, or providing service to the poor.”

When asked what altruism meant to her Shedd replied, “Altruism means doing kind things out of the goodness of my heart. If I see a peer struggling with a class or something, I always try my best to help out or at least encourage them that they are going to be alright. Altruism does not have to be something complex. A simple compliment is altruistic and can really help someone who is having a rough day.” Senior Arjun Vij, vice-president of E.A.T said, “Altruism means acting selflessly not out of duty or obligation but from simply a desire to help. With altruism, our community can thrive and succeed as a whole. However, without altruism, a community cannot prosper together. I believe that a lack of altruistic efforts in a community will result in a selfish society spiraling into disaster. Helping others and cooperating as a community will allow a promising future for us and the future generations ahead. By leading by example, we can spread the word of altruism, causing people to notice and follow us in the march towards a brighter future. Altruism is truly contagious, and just by displaying it, we could be the impetus for more altruistic efforts.”