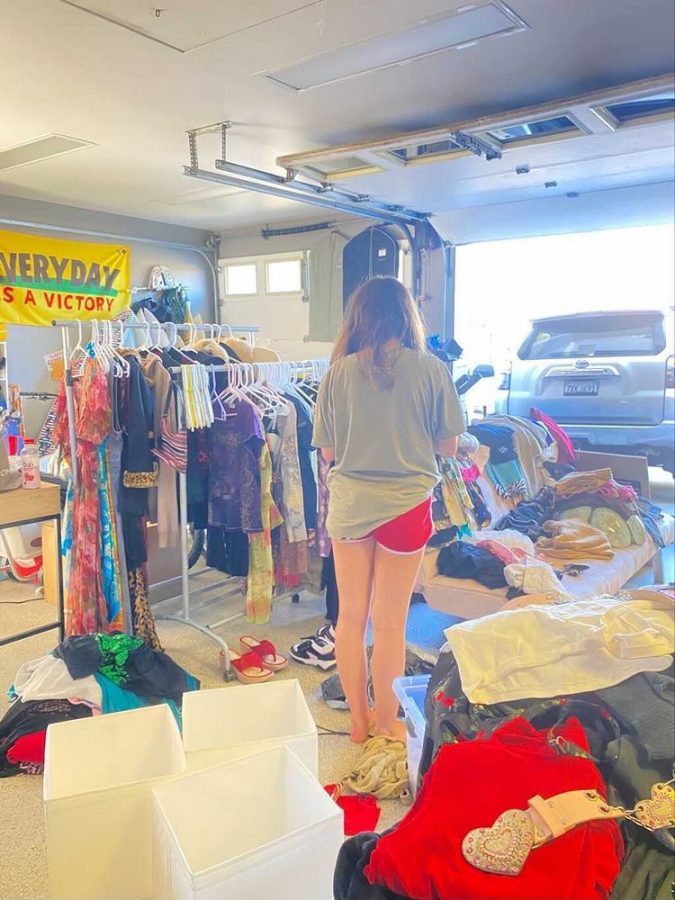 Setting up for the first day of sales

During a trip to San Diego, they realized they had a knack for picking out pieces and “needed to do something with it”. So they got to work, starting up a small business, as they had always wanted to do. The duo described their thought process, saying, “Our idea had long been something we dreamed of, but we needed to take steps to be able to start.” They created an Instagram account (@violetvisionsthrift) and began to gain social media presence with their outfit sneak peeks and artistic styling suggestions. Flyers were hung and posts were shared, and all the two could do was hope it would be enough for them to have a successful first event.

Labor Day weekend was approaching quickly and the pair was nervous that no one would come. They had the support of their friends, but also did not want to get their hopes up and tried to stay calm. As Clausman describes, the sale went better than they could have hoped, “I got to Ellie’s house for our sale 10 minutes early, thinking we would have more time to set up… but people were already waiting outside the garage.” The sale was set up in Tolan’s garage, and when people first walked in they were greeted with the sight of clothing, shoes, jewelry, and art prints displayed beautifully throughout. There were $5 and $10 bins set out in front of the racks of staple pieces, with table displays full of necklaces, rings, and charms. The show stopper was the quilt hung from the ceiling with delicate bustiers and slip dresses pinned up.

The sale was from 10:00-4:00 pm over the three-day weekend and after the final day, the two were proud of everything they had accomplished. They reflected on the experience, saying, “It was so much fun to see everyone’s styles and get more inspiration for future sales.” Clausman and Tolan are hopeful for the future, commenting, “Being able to support the second-hand market and help girls gain affordable clothes without fast fashion is an accomplishment on its own and we are so excited to continue.” Violet Visions Thrift started out with a bang and has a bright future ahead.