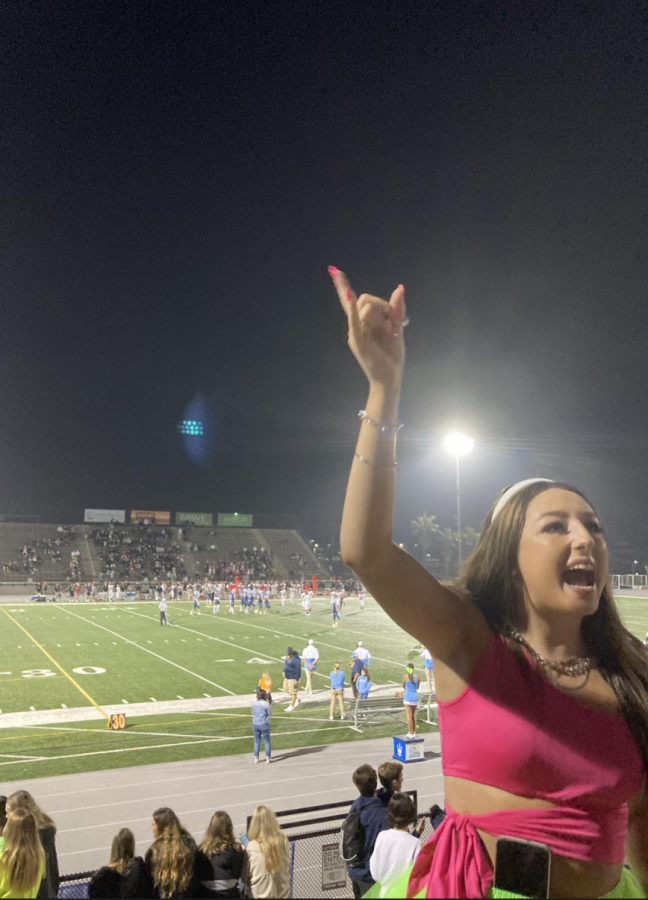 Brooke Barstow getting the crowd rallied up during the game.

Last night, the stadium was packed as the community came together to watch the third CdM football game of the season. Like every other game this season the Sea Kings, undefeated, crushed their opponents. So far the team has beaten Downey 36-20, creamed paramount 56-8, and crushed Palos Verdes 41-7. The CdM Sea Kings played the Palos Verdes Sea Kings last year and won by 17 points, but this year they performed even better and doubled that number. CdM is the reigning and superior Sea King football team.

As junior David Rasor (18) was throwing the ball to senior Max Lane (1) the crowd was beginning to stand on their feet. The audience started roaring when Lane entered the end zone. Lane played extremely well this game; he outran all of his opponents and scored 3 touchdowns.

This game was also special because the CdM Orchesis, drumline, and song team performed. The Orchesis team has been rehearsing their dance since August 18th. Wearing neon yellow bodysuits, black leggings, and the classic ponytail, the orchesis team performed at halftime to the song fast (motion) by Saweetie. Senior and orchesis dancer Kyla Abdelgawad was asked what her favorite part about dancing at a football game is, and she replied “a close tie between getting the Orchesis girls hyped up before we perform or hearing the crowd cheer right as we finish”.

It was also a special game because it was neon out. The entire student section was decked out in neon t-shirts and face paint. Students at the game probably noticed the out-of-state visitor, wearing a neon yellow tutu and a neon pink bodysuit. Making sure the crowd was staying cheerful, a cheerleader from Idaho’s Borah High School, Brooke Barstow, came to watch the game and liven up the crowd. When asked what her favorite part of going to this football game is, she screamed trying to talk over the crowd, “kicking butt, wearing neon, and taking names, go Sea Kings!”

Parents, students, and the rest of the CdM community came to support the boys, watch the Orchesis performance, and have a fun Friday night!