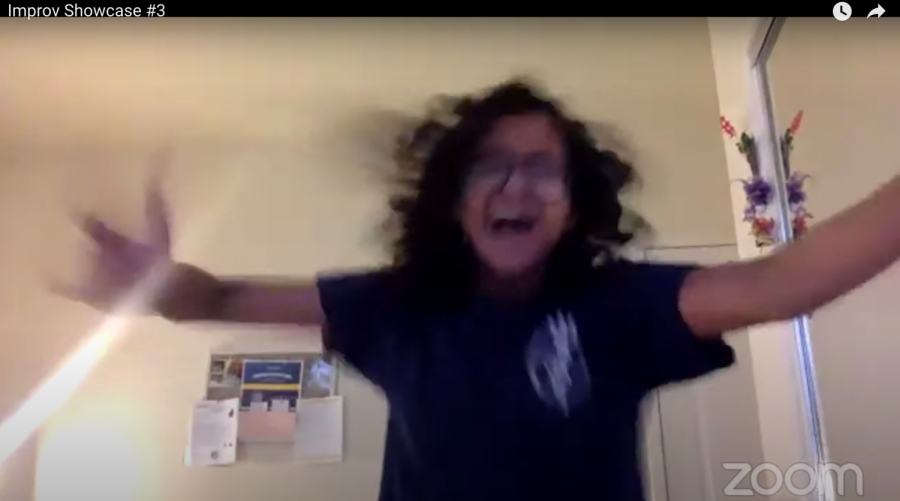 On a Thursday night, the third improv showcase was hosted by Miss. Ybarra. The live show was streamed on Youtube and can be accessed through their channel Cdm Improv, or this link https://www.youtube.com/watch?v=GbeHr1xQH0I. It featured many students from CdM and a few from Mater Dei and University High doing improv and having fun. The audience had the opportunity to use the live chat to interact with the showcase and make suggestions that would be used as topics for the students. Based on the prompt such as “radio stations”, audience members got to contribute the most ridiculous radio stations they could think of like “unsmooth jazz” and “construction site ASMR”. It was a unique experience since throughout the show, a small community was built in the chat as people made comments on others’ suggestions and cheered on the performers.

After introducing the participants, the first game up was a radio host game, where each student was assigned a radio station to host based on their assigned suggestion from chat. The performers would host their show for a few seconds and then the screen would switch to the next, queuing them to begin their turn. It was a lot of fun to watch the students come up with characters on the spot and do creative things like sing “The Hot Dog Song” from Mickey Mouse in multiple voices.

Transitioning from their strong start, Miss. Ybarra switched things up with a murder game, where the players would have to use charades to pass on a ridiculous murder story to the next person, kind of like telephone, but with charades instead of whispers. Using audience suggestions, the story the first student, Cole Hendrickx, had to convey was how Dwyane ‘The Rock’ Johnson was killed with a rotisserie chicken(courtesy of junior Kaya Placido’s suggestion) on the International Space Station. After going through Seth Trachtman, Natasha Jhalani, and Sanam Eslami, the emerging tale was that a minion was killed with a chicken in The Lion King.

They went on to play many more games like a dating show and four square, and overall it was a blast for everyone. Junior Mikayla Shaffer, a frequent commenter on drama-related events, said it was her time attending an improv show and she loved getting to see her friends “doing something they love”. Hendrickx, the CdM Improv manager gave his thoughts on the experience afterward, “I’m so proud of my improv students. They’ve learned and grown so much over the past 3 years I can’t believe it. This was truly an incredible experience and I’m so glad we can end our last virtual game so well.”