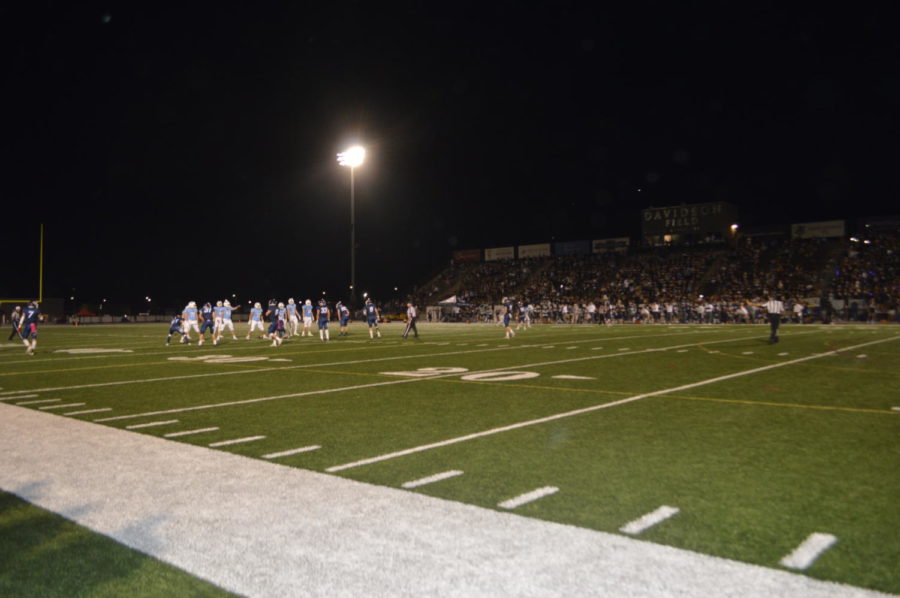 On Friday, October 25th, the CdM boys’ football team defeated rival Newport Harbor in the “game of the year”. They won 56-17, and continued their seven-year winning streak.

The much anticipated football game had been promoted the entire week. ASB covered the walls of CdM buildings with posters that hyped up students for the big game. A rally was held on Friday during school before the game. During the rally, there was a vibrant energy among the students. Performances were given by various performing arts groups including Orchesis, Cheer, and Drumline. Tickets for the game were in high demand and sold out early before Friday.

At the game, there was a large turnout, and the stands were full of students, staff, and parents, their faces painted Sea King blue, ready to cheer on the football team. ASB had a DJ stand, smoke blowers, and towels for the crowd to wave, and the cheer squad led the crowd into cheers with bright smiles. The CdM Pep Band was also seated on the track, and launched into various tunes before first downs and after touchdowns. Senior Sam Hurwitz, who was in attendance with the band, said that “we got so many touchdowns, I basically have all the pep songs memorized.”

Newport Harbor started the game off strong, leading as far as the second quarter. Close to the end of the first half, however, CdM scored four touchdowns, two by senior Ethan Garbers, and two by senior John Humphreys. CdM ended the first half leading 35-10.

During halftime, performances were given first by Newport Harbor’s dance team and marching band regimen, and then followed with stunning performances from CdM’s Orchesis, Cheer, Sparkle, and Jazz Ensemble.

CdM dominated the entire second half, scoring two touchdowns, both by Humphreys, in the third quarter and another one in the fourth quarter, ending the game with an incredible final score of 56-17.