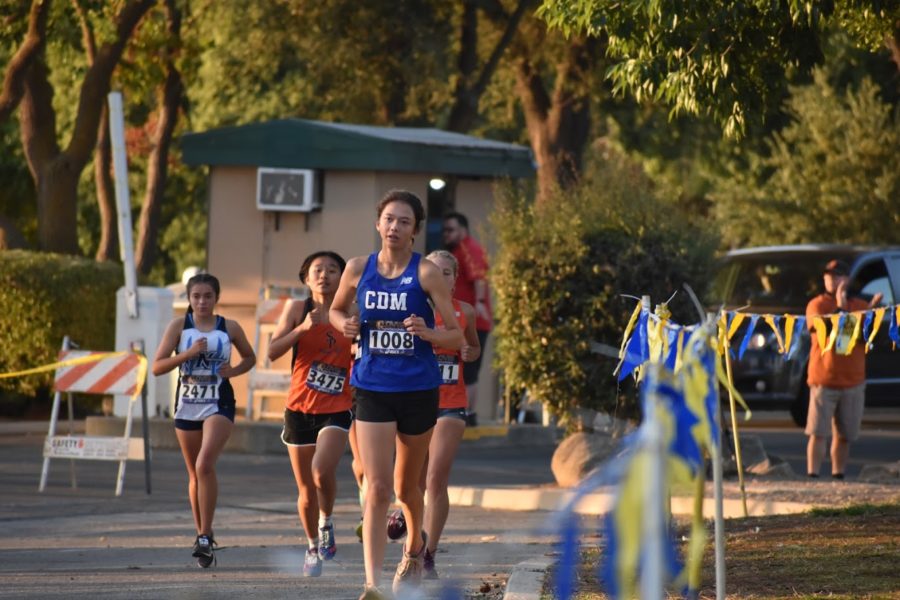 Before the sun had even risen on the morning of Saturday, October 12th, Corona Del Mar’s varsity cross country’s girls’ and boys’ team were set to compete in the annual Clovis Invitational. In complete darkness and freezing temperatures, they headed out at 5:30 a.m. to the Woodward Park race course. Upon their arrival, the girls immediately warmed up for their race, running with flashlights to avoid tripping on tree roots and rocks as they jogged the course.

At 7:15 a.m., when the sun had finally appeared, the gun went off and the girls competed in the varsity medium schools division race. The race course started on a stretch of dewy grass and had rolling dirt hills framed by trees on either side throughout. The morning was extremely cold and the air was dry and dusty. “My hands were numb the whole time,” senior Maya Buchwald remembers with a rueful laugh. The Clovis Invitational being such a big and important race, it was an experience worth learning from – both the positive and the negative aspects.

Later on in the day, the boys raced at 8:00 a.m. With parents, coaches, and runners from the girls’ team cheering them on, they finished in 19th place overall. Junior Ethan Bollman led the team to the finish line with a time of 16:47 and a place of 41st, followed by senior Nico Pence in 68th with a time of 17:05, sophomore Vlad Marinescu in 72th with a time of 17:08, sophomore Colin Choe finishing in 18:00 in 150th place, and sophomore Zach Harris finishing in 18:58, coming in 198th place. Freshmen boys Jasper Mahmood and Evan Pence ran a strong debut race, coming in at 20:15, 212th place, and 21:47, 218th place, respectively. “I felt strong in my race,” Bollman says. Choe adds, “We did really well, despite not having two of our best guys. The conditions were really good.”

All in all, it was a memorable weekend with hard work, determination, and a chaotic eight hour trip that landed the team a spot in one of the most important cross country invitationals in the country. Personal records were made that day by Buchwald, Qiu, Choe, Pence, and Bollman. Coach Mike Salzman says, “I think everyone did a really fantastic job at Clovis. After a rough start getting up through the LA fires, they relaxed, stepped up to the play, and did a really fantastic job. I’m really proud of what they did.”