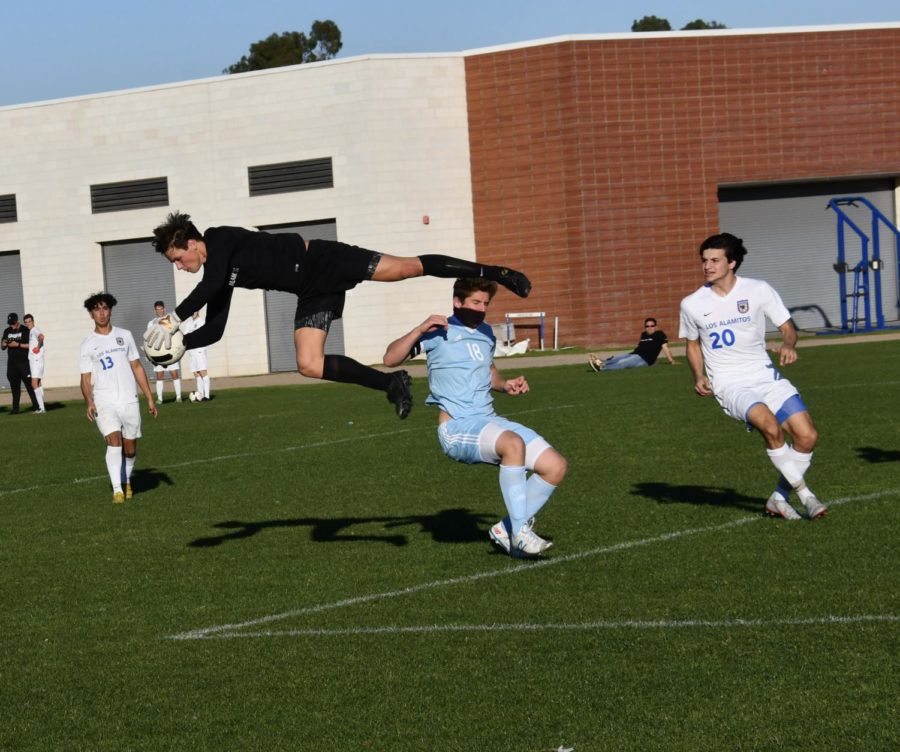 Even though Corona del Mar and Los Alamitos had better luck with elements this game, it started off the same. Ten minutes into the match, Los Alamitos had scored two goals on CdM’s keeper Wally Korbler. The entire team was asleep, and the Griffins started out strong. Los Alamitos‘s first goal was a result of their forward making a run down the center. The second was from a sprint down the line and crossing the ball to the middle.

With two goals scored on them and the half not over yet, CdM was frustrated. They came back and 15 minutes in senior Nick Wynn shot a ball Niko Urban laid off to him, giving CdM a goal. The Sea King’s stepped up their defense and took more shots after his goal, but Los Alamitos was still able to slip one more goal in before the half ended.

The second half started off with a different vibe. Both teams were determined to win this important match before CIFs start, and the teams were tense. Many more fouls were being called and the game was stopped three times to check on a player’s wellbeing. Three yellow cards were also given throughout the half, and all three receiving players were ejected from the game.

Once the Sea Kings woke up during the second half the teams were matched. The ball was constantly going back in forth. Los Alamitos‘s speed and CdM’s passing and shooting skills led to an intense half for all of the players and parents. CdM pulled through when senior Matt Katz followed a ball into the box and brought the score up to 2-3. Rallied with their recent goal, CdM began attacking Los Alamitos’s goal. The penalty kick given to CdM when the Griffins’s keeper was given a yellow card, was the kick that tied the game. Now 3-3, Los Alamitos dribbled down the center and once again hit net. The game was almost over and CdM kept trying to get one last goal to keep it going. Sadly for the Sea Kings, the referee ended the game before they could tie it up again. CdM walked away with the defeat of 3-4.