NMUSD Removes 4×4 After Backlash From The Community 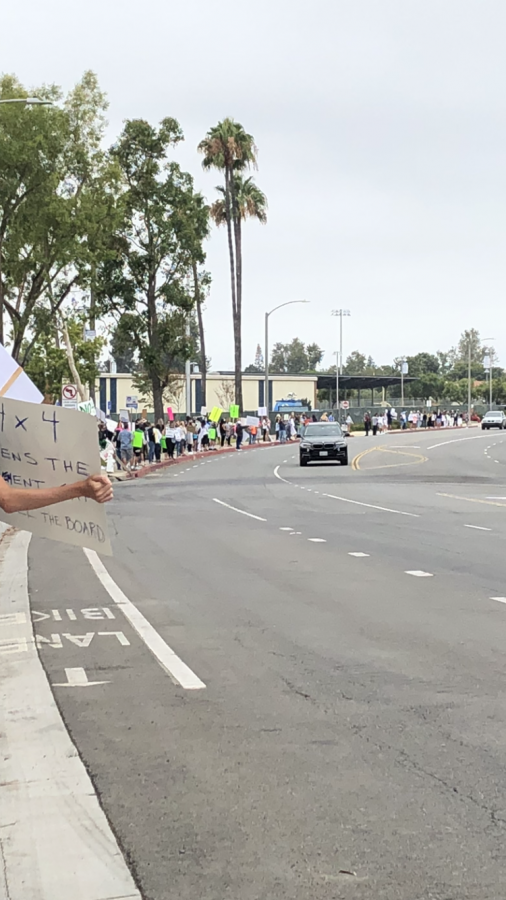 On Tuesday, July 28th, in a moment of victory and relief for many CdM students, the Newport-Mesa Unified School District Board of Education announced that, with the exception of Estancia High School, the 4×4 instructional model will not move forward. Instead, it will be replaced by a traditional block-day schedule.

CdM students, parents and teachers have responded to the 4×4 plan, approved one week ago, with an uproar of petitions and an organized protest on Monday, July 27th. At 10 am on Monday, students lined the streets in front of CdM with signs, and were even granted support from people that honked their horns as they drove by, as well as an audience from ABC reporters at the scene. “NMUSD STOP SETTING US UP FOR FAILURE”, one sign read, while another claimed that “4X4 IS FOR TRUCKS, NOT SCHOOLS!”

The 4×4 model came on the heels of three months of virtual distance-learning, which the majority of CdM students say they disliked and found ineffective. Originally, it proposed a plan in which two groups of students would alternate coming onto campus, one group in the morning and the other in the afternoon. It also planned to split up a student’s classes between fall and spring semesters. The results of Trident’s poll showed that 80% of students did not support the 4×4 model, with 10% suggesting that they would “maybe” be okay with it, and another 10% supporting it.

“The model doesn’t leave any room for APs or elective classes,” junior Pierce Hemphill, decked out with a homemade mask and a sign reading “NO 4X4” at the protest on Monday, said. Meanwhile, in his response to the poll, senior Marc Gildenhuys wrote that “there is no model, where Southern California stands [in terms of coronavirus case control], that could be effective… in education and still keep students and staff healthy… the board should have invested… in making remote education more user-friendly… I almost cannot believe that this is the best idea NMUSD could come up with [though] it’s difficult to disappoint me at this point.”

However, it appears that NMUSD has heard the community’s concerns. Instead of the 4×4 plan, the district approved a traditional block-day schedule, promising that more details about safety guidelines are to come.

“I am very excited,” said CdM’s ASB president Troy Tsubota, who on the day of the protest mentioned that he was amazed with the “fantastic turnout” from around 200 passionate students and parents, and that he “really believe[d]… that the board [would] reconsider the 4×4 plan, because it [was] very clear that students and teachers across the district [were] not happy.”

Trident’s poll results showed that upperclassmen tended to be more against the plan and in favor of an alternative hybrid model, while underclassmen were more open to the idea of incorporating the 4×4. Overwhelmingly, many students wanted to see an alternative model, or else move to online learning entirely.

While junior Mariam Hagh expressed concern over how the district would handle safety measures at first, she later said, “Well, you know what, it’s fine… as long as it’s not 4×4!”

“I do not know what the district has in store for us for next week’s meeting,” Tsubota added, “but I’m glad [that] they’re listening.”