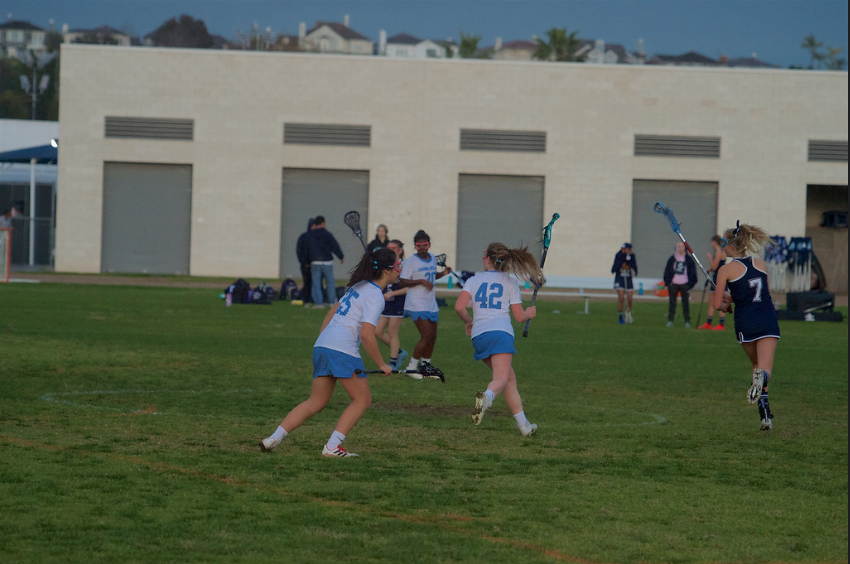 In the middle of the week, on April 17, the Corona del Mar High School (CdMHS) girls lacrosse Junior Varsity (JV) team competed against Mater Dei High School’s JV team. Both of the teams were eager to play each other throughout the whole season.

The game began immediately with Chynna Linkon scoring against the opposing goalie. The crowd went ecstatic at the start of a great game. The draw was taken again, and this time Mater Dei took the ball. They were sprinting down the field and scored against the goalie, Ellie Spotts. Many of the varsity Mater Dei players were in the crowd, which they were excited.

Throughout the middle of the game, Mater Dei scored 4 more goals. Spotts stopped many of the shots taken at her. But sadly, they were up by 4 points. The halftime buzzer rang and both of the teams huddled up to talk.

The second half started with the opposing team scoring another goal. CdM called a time out to discuss what to do next, since they were losing 2 to 6. CdM was ready to get back the points that they had lost. Jilly Senk got ahold of the ball, after taking the draw, and began to sprint down the field to the goal. The referee called the other team on a cross body check so Senk got a free shot. She scored the goal!

Many goals later, the score was not 8 to 9, with CdM losing by only a little. There were 48 seconds left in the game. Senk took the goal and snatched it away from the other team. She passed it to Elysia Samen, who scored the point that tied both of the teams up.

Now, there were only 16 seconds left in the game. Mater Dei got the ball, but the time was too late. The two teams tied up against each other at the end of the intense game.